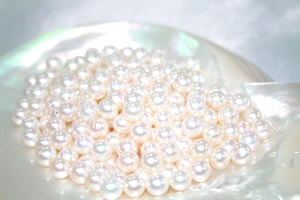 On this page you will find information about the pearls I use in the jewelry. This are the natural cultivated pearl. Those are pearls grown under natural circumstances without the use of foreign object to influence the shape and the roundness of the pearl. The pearls I use do not peel off for they are made out of 100% nacre.

All pearls, even the South Sea pearls, are nowadays cultivated. To dive for pearls is too risky and will destroy too many oysters

Natural cultivated pearls are pearls cultivated the same way like it used to be formed in nature by a parasite or a piece of food lodging itself in the mantle tissue of a host oyster. This is now done by human hands. In the the mollusk calcium carbonate crystals, called nacre, forms layer upon layer around the foreign object in a concentric fashion until a pearl is formed. Those natural pearls are never completely round as they are natural formed and grown. They are fully made of nacre and therefore have a better luster.

It takes the mollusk a few months till a few year to produce a pearl. Depending of the variety and the size of the mollusk there can be 10 till 30 pearls growing at the same time. A mollusk can even produce two till three harvest in it’s lifetime.

The quality of a pearl depends of the shape, for it must be as round as possible, (in valuable baroque pearls there is a different criteria) the size, the larger the better, the skin, for an unblemished skin is better and the pearl luster which has to be very even with a good shine.

South Sea Pearls are cultured pearls grown in large tropical or semi-tropical oysters in Australia, Myanmar, Indonesia and other Pacific countries. They usually range in size from 10 mm to 20 mm and the price is quite high and not only because of their size but also they are scarce.
Tahitian Pearls are cultured pearls grown in a variety of large pearl oysters found primarily in French Polynesia. Their beautiful, unique colors (the famous black pearl for example, but the colors range from light grey to green and purple) and large size are very high priced.

Cultured Pearls are pearls grown formed with the help of human hands by inserting a foreign object into the tissue of the oyster or mollusk. The best cultured pearls have 12 layers of nacre and they appear perfectly round (they are available in every possible shape) with very soft luster. In this way pearl farmers can induce the creation of the traditional pearl and new shapes and this keeps the prices low. There are many pearls on the market with much fewer layers of nacre and they look very dull with no luster at all.

Pearl Grading are the factors used to determine the quality of the pearls.

Luster refers to the pearls shine which can be low, medium, high or very high. The luster and the thickness of the nacre are directly related. The more nacre the deeper the luster. The luster of a pearl is like looking into the “eye” of the pearl and should almost cover the entire top of the pearl. It is also the beautiful soft glow that varies from a pinkish, bluish, yellowish, greenish or grayish color. It is this glow, this luster that determines the color of the pearl.

The surface quality of the pearl is also important for the value. During the nacre layering process sometimes spots and bubbles will appear because the process depend on many things such as water temperature, water condition, the current or the health of the oyster. Most pearls have an imperfections or inclusions, such as bumps or scratches or variations in color. So the cleaner and smoother the surface the higher the value.

Generally there are three main categories in shapes. Round pearls are the most desirable and valuable, the symmetrical pearls have a very even shape but which are not completely round, and the baroque pearls which have all kinds of asymmetrical shapes but they can be as lustrous, appealing and valuable as the round ones.

Nacre are the layers of secretion of a crystalline substance of which the pearl is formed. This layer known as nacre (pronounced nay-ker) is formed around an “irritant” in a mussel. The mussel coats the “irritant” with layer upon layer of these calcium carbonate crystals in a concentric fashion until a pearl is formed.
Natural Cultured Freshwater Pearls are generally 100% nacre. The thicker the nacre the greater the luster and the longer the pearl will last without showing wear and the more valuable the pearl becomes.
Color is an important part of the pearl. Natural Cultured Pearls come only in white and soft peach colors. The different colors in those white and peach ones come from various factors like the pearl’s genetics, the location of the “irritant”, the quality and the current of the water.

All other colors are man made and the process of dyeing is often kept as the secret at the pearl farm. It is known that the pearls will hang and grow for months at the time in natural dyed water before they finally have absorbed the color.

Size is a important as well for the value of the pearl. Pearls come in sizes from 1,5 mm seed pearls till 35 mm in baroque pearls and the larger the more valuable observing the earlier mentioned criteria as well.

Baroque pearls come in very new and large shapes. Some of them have a kind of round center with “wings” at the sides or they are rectangular and bold like cushions with a length from 18 mm till 35 mm. Often is the color nearly white with a bluish and pinkish luster that resembles the South Sea pearl.

Keshi is formed in saltwater or freshwater in Indonesia, Australia and Japan. They are generally small in size and, because there was no nucleus to guide the shape of the pearl so their shape varies widely. Keshi pearls come in a wide variety of colors, and because of their shape they tend to have a higher luster than round pearls.are rare to find since most pearl farmers keep them by themselves because they are considered nature’s true gift. They symbolize happiness, love and good luck and they contribute to the beauty of the wearer

Rice Shaped Pearls are pearls shaped like grains of rice.

Button Shaped Pearls are flattened to some degree, making them resembles a button or perhaps a disk rather than a perfect sphere.

Cross Shaped Pearls, Heart Shaped Pearls and Baroque Pearls are the other new shapes that are very fashionable at the moment.

Mother of Pearl is the basic substance which is secreted by oysters and mollusks to form the inside of their shells. It is the same substance which forms pearls. Mother of Pearl is now used extensively as the nucleus in pearl cultivation. The shell of a mussel is cut into squares and then run through a process which rounds the pieces into beads. These beads are then implanted into the oysters which then secrete nacre upon the mother-of-pearl beads to form the cultured pearl.

Biwa Pearl or Kasumiga Pearl
The pearl production of the Biwa Pearl came to a standstill in 1985 when the water of Lake Biwa was so polluted that all the oysters died. Since than farmers have successfully tried to crossbreed Japanese and Chinese oysters and they came out with a better and stronger race of oysters and new variety of pearls which they cultivate in Lake Kasumiga-Ura north of Tokyo.